UGANDA, Kampala | Real Muloodi News | The Parliamentary Adhoc Committee investigating the Nakawa-Naguru land allocation has summoned the owners and officers of beneficiary companies of the land allocation, who to date have failed to appear before the Committee despite the several notices in newspapers and invitations extended to them.

Among the companies is the mysterious Internal Medicine Virginia PC, of which the Directors are unknown to the Uganda Land Commission (ULC).

Hon Beatrice Byenkya Nyakaisiki made the revelation to the Adhoc Committee on March 22 that the directors of the company could not be verified.

This elusive company was allocated 15 acres on Nakawa-Naguru Land per President Museveni’s directive.

Byenkya revealed that as part of her due diligence as a ULC chairperson, she stipulated a physical meeting with the company’s directors, but despite ULC’s efforts to meet with them, no one stepped forward.

According to Byenkya, while ULC surveyed the 15 acres of land intended for Internal Medicine Virginia PC in accordance with the Presidential directive, they withheld the papers owing to the non-existent directors. She says the Commission still has the documentation.

However, Byenkya says neither company can be found in the Uganda Registration Services Bureau database.

Despite the President’s letter, Byenkya stood firm with her request to speak with the directors for clarification and confirmation. However, instead of attending the physical interaction, they continued to avoid the meetings.

The only information Byenkya had about the company was the contact name of Faruk, and the company’s purported address being 1179 Courthouse Rd Suite 1 Stafford, VA 22554 United States.

Byenkya told the Committee: “Mzee called me and gave me Faruk’s phone number. I rang him (Faruk) and when we told him to come with certain documents, he would say, “But it’s a Presidential directive.”

Byenkya insisted on meeting them in person before carrying out the instruction.

Byenkya says she eventually discovered that Faruk is a gentleman of Arab descent hailing from the Mbarara neighbourhood, albeit he was too secretive to fulfill any demands for a physical encounter.

“We interfaced with everybody but Virginia, for one reason or the other, they were not coming up for the meeting. But it is a presidential directive,” said Byenkya in part.

The former Minister of Lands, Housing and Urban Development, Betty Kamya who is now the Inspector General of Government (IGG), was also summoned to appear before the Adhoc committee on April 26 to explain her role in the sale of Nakawa-Naguru land.

Kamya said they used to correspond with Internal Medicine Virginia PC through their contact person only identified as Faruk.

Opendi referred Kamya to a letter she allegedly wrote on May 6, 2020, to the Uganda Land Commission to push for the allocation of 15 acres of land to Internal Medicine of Virginia.

Opendi indicated that Kamya instructed the Uganda Land Commission to expedite the process of allocating land to the Internal Medicine Virginia so that it could construct a research hospital facility at the Nakawa-Naguru estate.

However, Kamya said she only wrote the said letter because the allocation of the land to this investor had taken so long.

The chairperson of the committee Dan Kimosho says they are yet to get a contact of the said investor with the number they see on their correspondences.

Now, the elusive company has been summoned to appear before the committee on Tuesday 3rd May 2022 at 10:00 am without fail.

The full list of beneficiaries summoned before the committee includes: 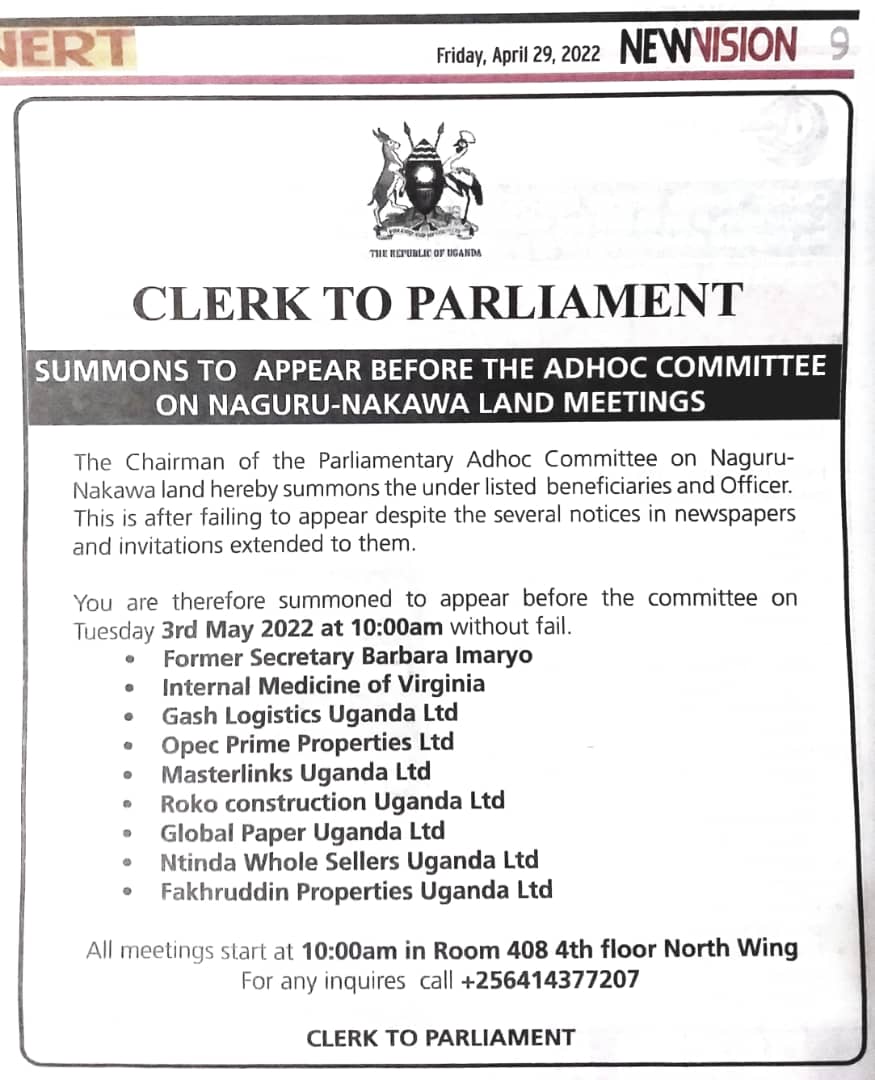 It remains to be seen if the company’s secretive representatives will actually come forward on Tuesday per the summons, or if the Adhoc Committee will rule that the company Internal Medicine of Virginia does not exist because they have failed to locate the owners, and therefore the 15 acres of the Nakawa-Naguru land they were given be reallocated to verified investors.

Meanwhile, Kampala’s biggest Real Muloodi Dr. Sudhir Ruparelia has asked Parliament’s Adhoc Committee investigating irregularities in the sale and give-away of Nakawa Naguru land to increase the acreage he was given from 3 to the 10 acres that he applied for.

“My humble request for this committee is to help us get the 10 acres we originally applied for. They have allocated land to people that do not exist, so what is wrong with me getting 10 acres?” Sudhir told the committee.

When the committee members asked Sudhir to mention those companies that were allocated land but don’t exist, the business magnate replied; “I was expecting you to say we will try our best to make sure you get the 10 acres.”

Mbarara Civic Engagement Event: Property Taxpayers and Local Government to Meet on 23rd of May, 2022